Occasionally, I draw stuff that is not tengu-related. Like this here yakuza fellow - this is a step-by-step progress sequence to show how I did it. 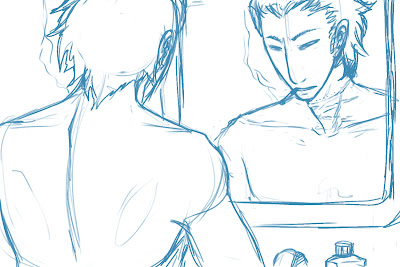 Step One: Sketch out the basic layout - there tricky part here was making sure that he was correctly reflected in the mirror. I had to run over and look into my own bathroom mirror six times over just to get it right.

For once, I actually managed a pretty clean sketch - I usually sketch as if I've got uncontrollable spasms. 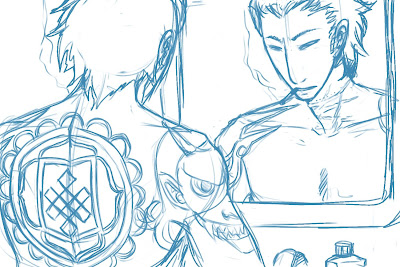 Step Two: I sketch out his tattoos on a separate layer, in case I feel the need to re-do them completely. 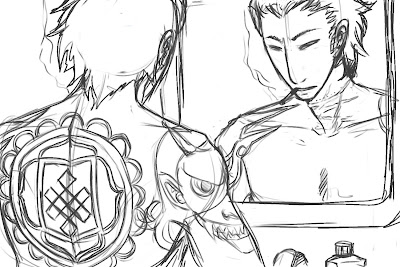 Step Three: I always sketch in blue, and once I start colouring, I convert everything to black - in this particular picture, I make no cleaner lineart, since I want to keep the paintery feel. The lineart layer(s) are set to "overlay", since that makes them blend better with the underlying colours. 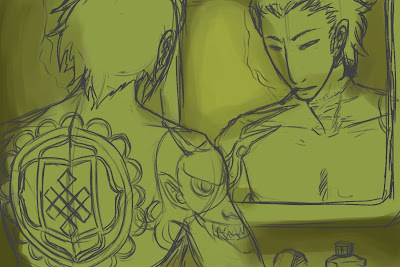 Step Four: Overall colour scheme is important, so I block in the general areas of light and dark in the background. I pick green, because green is a nifty colour, and it fits this character and situation - it's not the nicest bathroom in the world, I imagine. 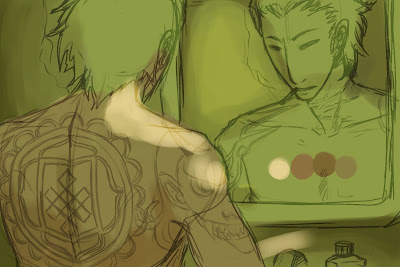 Step Five: Blocking in the colours of his skin. When painting people, I always start with the skin, for some reason. The blobs of colour on the mirror image is my palette - even though Corel Painter has a nifty palette function in the program, I've always felt more comfortable blobbing it out on the actual painting. It helps me keep the colours consistent. 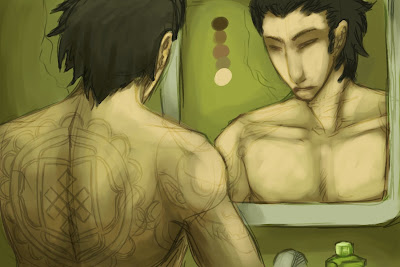 Step Six: I finish blocking in the colours of his skin, and the colours of the mirror-frame and the little things in the background. I keep the walls green, because I like them that way - I was going to do this complicated thing with tiles, but I didn't feel like it. 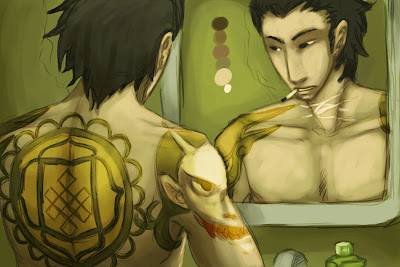 Step Seven: The tattoo is coloured on a separate layer - set to "overlay". The design is not final, colour-wise - I can't really make up my mind - but it looks good enough for now. 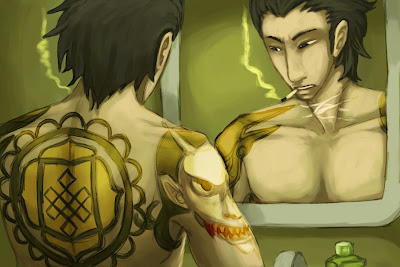 Step Eight: I discovered that his nose was far too long, so I painted over it on a separate layer, and raised his mouth and painted over his eyes as well. Fixed some minor details, painting over his hair, doing the cigarette-smoke, etc., etc. Also fixed some bits with the tattoo - I'm still not entirely happy with it, but it looks good enough. 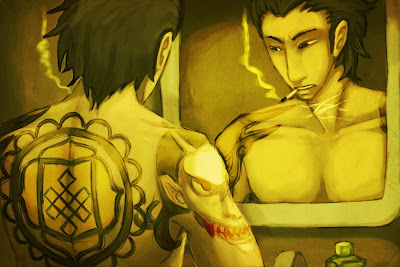 Step Nine: Final step! I add three layers - two overlay layers filled with various shades of green, since I noticed he looked a bit washed out, and to darken the mirror image, and then one layer with a paper texture that I found in the dark recesses of my texture folder. And now it's done!

I've already shown off the "antagonist" (antagonist makes him sound evil, which he isn't he's just opposed to the main POV character) in the previous post - the great tengu of the mountain - so maybe it's time to show off the POV character/protagonist? 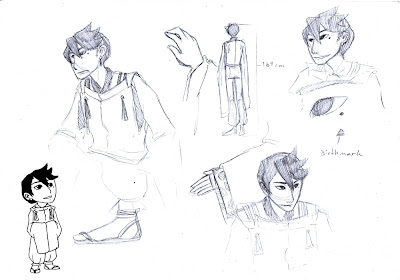 I'm not really happy with any of these, face-wise - he comes out looking a bit crooked - but this is the main idea. He's wearing the traditional shinto-priest clothing - aka Heian era courtier clothing (something like this, without the silly hat) - with some unconventional shoes. I've also left some details out - such as the fan/uchiwa shinto priests traditionally carry, but it's enough to get a feel for the character.

Toshi is... cute. He's cheerful. He's happy-go-lucky, endlessly positive, and not afraid to let you know what's on his mind - he gets into trouble with supernatural forces, and he gets scared, but he never really lets it get him down.

The shrine he's the keeper of has a layout like this: 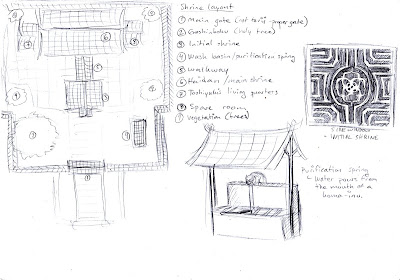 ... My handwriting sucks. Aaaanyway. This is the basic idea - I've done some sketches on the architecture of the shrine buildings themselves, but none of them have come out very well - but with this, at least I know the layout for the shrine, so I can draw them when I have to.

And last but not least - one of the yokai (see: definition) that comes and bothers Toshi over the course of the story. This is a nekomata - which is a sort of monstrous version of a cat. Nekomata were once regular cats that were turned into yokai when they got so old that their tails split in two. 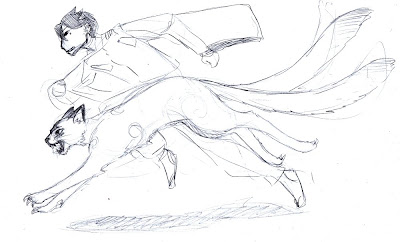 Toshiyuki is in there as a size comparison - Toshi is about 168-170-ish centimeters tall, and the imagined ground-to-shoulder height of the nekomata is roughly 1 meter.

So, A Thousand Miles of Wind is going to be the story of a young shinto priest named Toshiyuki, who accidentally gets into trouble with the local supernatural critters - the most important one being the tengu who lives on the same mountain. 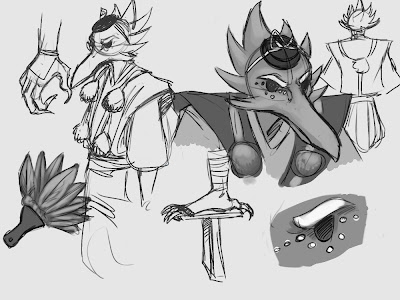 I'm still kind of fiddling with the details of the tengu's design - adding things and subtracting things all the time - but I'm pretty happy with how he looks right now. He's a bit difficult to draw from the back, considering all of those feathery things on his head, but I'll get around to that.
Upplagd av Anna kl. 21:25 No comments:

It always feels awkward, posting for the first time in places like this - I got tongue-tied writing my first LJ-entry too. The good thing about this place, though, is that I'll be sticking around here, unlike LJ.

I find I draw a whole lot more than I do interesting things to write journals about. Sure, I write a lot, but not diary-style things.

So yeah. In the future (soon, I promise), I'll be using this place to post sketches and WIPs and scribbles and worldbuilding stuff that I don't want clogging up my DeviantArt account.

For the next few weeks, there will probably be a lot of sketches for my comic project, A Thousand Miles of Wind - architecture, items, characters, page-layouts, etc., etc. Just stuff. There'll be a lot of other stuff as well, but I'm trying to focus on ATMoW, since it's my final project for college.